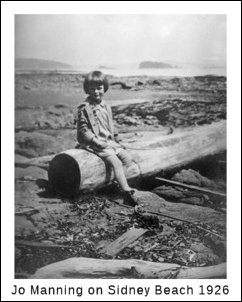 Born in 1923 in Sidney, Vancouver Island, B.C. (then a village surrounded by forest, meadows and sea) the daughter of a medical doctor. She lived in an old house facing the Straits of Georgia. In 1929 the family moved to Ontario where she spent her school years in Amherstburg not far from Windsor.

During the Depression her father’s practice was slow so he spent many hours painting and the interest was passed on to Jo when he gave her brushes, paints and other materials for Christmas and birthdays. She later attended the Ontario College of Art where she studied drawing and painting under John Alfsen and graduated in 1945. She married, and for the next fifteen years raised four children. During that time she continued to draw and paint, and study current developments in art. 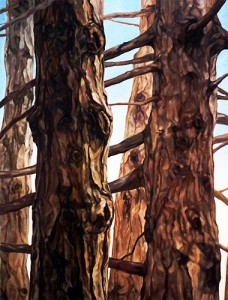 By 1960 she was able to return to the College and study printmaking. She held her first solo show in 1965 at the Pollock Gallery, Toronto, of drawings, then in 1968 held a second show there and also at the University of Waterloo. From 1965 on she became active as an instructor and taught at the following places: Ontario Department of Education’s Youth and Recreation Division; Sheridan College (1971-3); Dundas Valley School of Art; Centennial College; Elliot Lake Centre for Continuing Education; Artists’ Workshop and elsewhere. In 1974 she participated in a three-woman show at the Wells Gallery with Fran Jones and Jane Beecroft. Jane Beecroft wrote poems to accompany Jo’s etchings which were presented in a portfolio entitled “Paradox.” Both women worked independently so that each would retain individuality of approach. Kathleen Walker noted their work as follows, “Jo Manning’s relatively realistic depiction of nature has an underlying surrealistic quality, that is particularly evident in the Paradox series . . . The beauty of this series, is that both Manning and Beecroft have managed to retain their individuality. The poems and the prints can stand alone, they do not need each other, but they do complement each other.”